When the computer on the commercial space tug Nostromo detects a transmission in the middle of its flight
home, it wakes its crew to investigate the source of the signal. On the moon LV-426 they discover the wreck
of an old spaceship. Inside the ship, they come upon an array of large, leathery eggs. And the nightmare
begins…

Fight your way through fourteen original scenes from the Alien™ and Aliens™ movies. Choose which
adventure you want to play through at the beginning of the game.

Alien™ brings you:
Derelict Ship: Explore the unknown ship on LV-426 and find out what’s below this blue light.
Acid Burn: Follow the dripping acid through the decks to check where it goes.
Find Jonesy: Find the cat before the Xenomorph finds you!
Tunnel Hunt: Descend into the vent tunnel system to find and kill the Alien.
Self Destruct: Start the countdown to blow up the Nostromo and that abominable beast with it.

Aliens™ will haunt you with:
Combat Drop: Fly the drop ship to its destination without hitting a mountain.
APC: Navigate the APC through the structure on LV-426 and kill some Xenos on the way.
Bug Hunt: Find the colonists in the huge structure – and don’t get your team killed!
Queens Nest: You found the Alien queen and her nest. Now burn them down!
Loader Battle: Use the Power Loader exoskeleton to fight the Alien queen.

On top of this, you will get to play these multiballs:

Hypersleep: Revive your crew mates from their cryotubes.
Sentry Guns: Set up your automatic shooting sentry guns and let them blow Aliens away.
Ambush: Keep the attacking Aliens at bay in Ambush multiball.
Save Newt: Find Newt and protect her from the roaming Xenomorphs.

Should you still be alive after all those horrors, you might enter All Out War!
In this thrilling game, you will hunt Aliens by hitting the spinners hard, climb deck after deck to rescue
colonists over the shiny steel ramps, and finally stand up to the Alien queen in her nest! Be careful or the
ball-eating Xenomorph will throw your ball into the abyss and call its siblings to hunt you. Get your crew
members out of their hypersleep chambers to stand up to the danger with more than just one ball. Watch
the screen over the airlock closely, so you know where the enemy is waiting for you and how much time is
left before all is lost. If the moment is right, jump into the airlock and see what you must do next to save
everyone. Maybe you will even find a secret entrance? If you find the eggs, burn them so they won’t hatch
more of those face hugging monsters that try to jump at your ball from all sides. The MU-TH-UR 6000
computer will always have some surprises to help you out, so be sure to log in often. Run the lengths of the
darkest corridors to get a better shot at their ends. Get your crew into the ironclad APC and run it through
the inner hallways of the colony structures. And don’t forget to take your weapons with you! Better use
them all to double your score, save a life, or just hit that Alien twice with one shot!

Alien has been designed by David Sanders, art was directed by Aurich Lawson, music & sound FX have
been arranged by David Thiel, graphics & animation were rendered by Kelly Mazurowski, rules have been
programmed by Joe Schober, Brian Dominy did the software programming, James Rees engineered,
models by Matt Riesterer & Garret Popek, electronics laid out by Mark Rosier, some 2D artistry by Stefan
Akin and the voice of Carol Thiel, starring as MU-TH-UR 6000.
Alien has been resurrected by the Pinball Brothers. 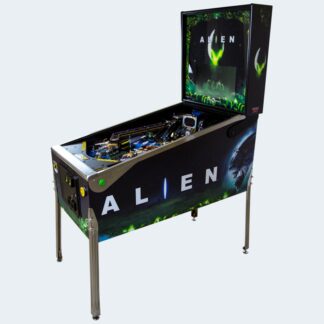 This store is under startup, but you can do orders and we will manually update your order with shipping cost Dismiss